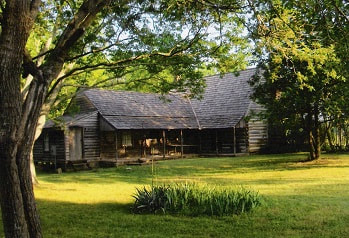 Church Quarter, a charming log cabin in western Hanover County, is a rare survivor of what was once a common house type.  Built about 1843, it is remarkably intact and unspoiled, and is significant architecturally as the best preserved antebellum log dwelling in Hanover County.

The original portion of the house features logs which are hewn partially flat on the sides, but left round on the tops and bottoms.  They are exposed on both the interior and exterior walls.  The board and batten doors and the door hardware are a particularly significant feature of Church Quarter.  The wide plank floors and painted black mantels are typical of the period.

A brick flower house is one of only two such dependencies surviving in Hanover County.  Many of the old flowers still remain on the property - such as pink rambling roses, white McCartney roses, lilacs, jonquils, crepe myrtles, boxwoods and an old arbor-vitae tree.

The three acre tract on which Church Quarter is located was originally part of a land patent granted to Richard Harris in 1719.  Harris was a member of the House of Burgesses in Williamsburg.  Other prominent Hanoverians to own the property were Nelson Berkeley of Airwell and John Thornton, a juror on the Parsons' Cause, which was argued at Hanover Courthouse by Patrick Henry.  Ruth Lee Pearson, a professor of Romance Languages at Randolph-Macon College in Ashland, was the last resident owner.

Church Quarter had a small role in history when General Thomas "Stonewall" Jackson, on his way from Richmond to Gordonsville, stopped here for water in 1862.

On April 1, 1969, Church Quarter was purchased by the Scotchtown Chapter, Daughters of the American Revolution.  By restoring and maintaining the cabin, the members of the chapter have, in a tangible way, perpetuated the memory and the spirit of the men and women who achieved America's independence.

Church Quarter is a Registered Virginia and National Historic Landmark.

Last updated July 31, 2020
Contact webmaster
The contents contained herein does not necessarily represent the position of the NSDAR.
Hyperlinks to other sites are not the responsibility of the NSDAR, the state organizations, or individual DAR chapters.